Holiday Greetings from Bonnie and John

Late in December, with one eye on the calendar, another on the computer screen, John writes:

So, another year has come and gone. We are each of us a couple years beyond three quarters of a century on this earth, and still vertical, mostly…in the past year.

Daughter Sara, son-law John and grandson James are only a few blocks away. James catches the bus from our house while we puppysit the grandpuppys, Bischoff (“Bischoff” is German for Bishop and also a popular brand of beer in Deutschland) a bordoodle (border collie and standard poodle) and Baxter, an aged Shih Tzu as well as our aged Shih Tzu who thinks he is a pit bull.


Sara and John are working for the Veterans Administration. James is an 8th grader at Patrick Henry. He plays soccer, does cross country in the fall and indoor soccer in the winter.

I stay busy with hobbies, some photography, but also some writing and occasionally a poem or two (see above). I also do some posts on Facebook mostly about science history and public health history. OLLI (Osher Lifelong Learning Institute.) classes have been a great enjoyment for Bonnie and me. I probably don’t retain as much as I used to, but it’s still fun to learn new things; sometimes relearning things I forgot I knew. Bonnie stays informed reading the Argus (paper version), watching MSNBC and CNN; and enjoys her weekly lunch with her friends. We have both had some medical adventures this year. Bonnie has some intermittent dizziness and nausea episodes; her anemia issues have disappeared.

I’m still in a relapse of the vasculitis that caused my kidney failure in 1974 and now is in my lungs causing interstitial lung disease a.k.a. pulmonary fibrosis; so, my prednisone is still increased a bit ☹. Despite an endless string of tests, scans and medication, my lung function has declined a bit and my doctors want me to use oxygen at least some of the time.


We lost some dear people this year:  John’s sister Anne and John’s cousin Robert Nelson. Robert (Bobby) and I sort of grew up together, living a few miles apart. Bob was a combat Vietnam War veteran; was active in the VFW and a member of the VFW Honor Guard.
Here is a Story about a Christmas from my past.

A Christmas Story for Anne

Anna Mary was the oldest of four siblings born to Kermit and Bernice (Carlson) Nelson. Dad called her Suzie after singing the song “Sioux City Sue”, and Anne singing with him.
On the farm in southern Lincoln County, Anne, 6 years older, taught me everything a five to eight year old farm boy needed to know; how to ride a bicycle, how to fix a flat with a ‘hot patch’, how to catch tadpoles, how to swim in the stock tank.
On the coldest winter nights, the kids would all sleep in the dining room by the old pot-belly coal stove that heated the whole house.
I remember one of those nights, when I was four or five and it was almost Christmas time. By the glow of the fire through the little mica windows on the old pot-belly coal stove, Anne told me about how Santa Claus would climb down the chimney and then through the stove pipe and hop out of the old stove, brush himself off and head for the stockings.
On Christmas Eve, we would hang our stockings, not some fancy decorated things with our name on it, but the actual socks we wore, from a nail on the wall. Then on Christmas morning, we would race to see what Santa had left us. It was mostly small stuff, the good presents were under the tree and were opened on Christmas Eve right after our dinner (we called it supper). Usually oyster stew with the little oyster crackers; then presents could be opened, after the dishes were done. 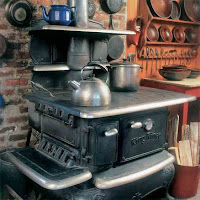 The old coal heater (which as I recall looked something like the one pictured above-left) and the corn cob fired kitchen range (above-right) were the only sources of winter-time heat in that old drafty house.  A few years later, the coal stove was replaced by an oil-fired heater with an electric fan. The corn cob fired range was replaced with a ‘modern’ LP gas kitchen range. By that time, I had learned the true Santa story and reality and didn’t worry so much about Santa burning up in a hot stove.
*****************
Happy holidays from our old, not so big, house to your house!
It just occurred to me that, ‘this old house’ which we built is now about the same age as the house where I grew up was, and which, at the time, I thought was really, really old. So, does that mean that we are really, really old?

All in all, Bonnie and I are doing pretty well and enjoying life. As I often say, “Every day is a gift.”
We hope you all are well and are having a blessed holiday season, and that you will have a wonderful new year.

Happy holidays from our old, not so big, house to your house!


It just occurred to me that, ‘this old house’ which we built is now about the same age as the house where I grew up was, and which, at the time, I thought was really, really old. So, does that mean that we are really, really old?
Much Love from Bonnie and John

Posted by John Marius Nelson at 6:17 AM No comments: